One key reason why we struggle to see progress in the world today is that we do not know how very bad the past was.

It’s easy to favor drug legalization when you’re middle-class and well educated. Your social group probably doesn’t include many people who abuse drugs much in the first place. Moderate users can afford their habit. And when their use turns into addiction, they usually have a strong support network to help out. It’s a problem, but not a huge one. In poor communities, none of this is true. Drug addiction is financially ruinous. It often leads to petty crime. Support systems are nonexistent. The justice system is harsh. There are no rehab centers on the Malibu coast to help out. Drug epidemics — Oxy, meth, heroin, you name it — are devastating. It’s something to keep in mind when you consider both the costs and benefits of drug legalization. Ending the war on drugs would indeed be a huge benefit, but the costs might be higher than you think.

One person’s illogical belief is another person’s survival skill.

This essay is so damn good.

The Logic of Stupid Poor People

All else being equal, upward mobility tended to be higher in metropolitan areas where poor families were more dispersed among mixed-income neighborhoods. Income mobility was also higher in areas with more two-parent households, better elementary schools and high schools, and more civic engagement, including membership in religious and community groups.

Hey wait that cuts across party lines what should I believe?! Cf. The Geography of Stuck.

Part of what makes obesity a wicked problem is how existing solutions — farmers markets, anti-corporate marketing — led advocates to frame the problem in particular ways. “The picture painted by advocates of grocery stores and gardens in the inner city was compelling to so many in no small part because it combined an established way of thinking about poor neighborhoods as materially deprived along with rising cultural support from middle-class Americans for eating healthier, locally grown foods,” Lee writes.

So we’re debunking “food deserts” now. More from Jacob Geller, I thought this was a useful way to think about it:

What I think is going on in America is that if someone really does want to eat healthy — and they know how to — then they will eat healthy, but huge numbers of Americans “choose” not to.  The cost and the distance don’t much matter.  And I put “choose” in air quotes, because people are not “choosing” per se, rather they are hooked.  They buy sugar instead of broccoli, because sugar tastes awesome and goes with everything, whereas broccoli is gross.  The deck is physiologically stacked in favor of sugar.  The cost and the distance are virtual non-factors for most Americans, outliers notwithstanding, and obesity really does need to be tackled aggressively on the demand side, if at all possible, precisely because distance and cost are virtual non-factors.

The economist’s way of saying the same thing is that unhealthy foods (like sugar) tend to be sort of addictive, or habit-forming, or are at least advantaged by our physiology or biology, so our demand for that food tends to be pretty insensitive to price (or “inelastic”).  And because our demand is insensitive to price, shifting the supply curve one way or the other isn’t going to change the quantity consumed all that much.  You can fiddle with the supply curve all you like, but the problem is ultimately that this inelastic demand curve is keeping quantity consumed stuck more or less in the same place.  So from a public policy and public health standpoint, it’s better to just tackle the demand curve, by shifting it leftward or making it less inelastic, through solid health education curricula or forming good eating habits during childhood, or whatever, if possible.

The Ecology of Obesity | Newgeography.com

The strong association between poor diets and poverty allows people to use this issue as a cipher for something else they want to say, which is less socially acceptable.

Places to live in which the people around you have no problems that need cooperative solutions tend to be sterile. America outside the enclaves of the new upper class is still a wonderful place, filled with smart, interesting, entertaining people. If you’re not part of that America, you’ve stripped yourself of much of what makes being American special.

Take Care of Your Choropleth Maps. Great overview of how some seemingly simple tweaks in the data limits, colors, etc. can result in a different story.

If your ultimate goal is to reduce inequality, then you should be furious at the doctors, bankers and C.E.O.’s. If your goal is to expand opportunity, then you have a much bigger and different agenda.

A field study, in these Hard Times, of the Homeless (as observed in the H Street Encampment, Fresno, California). Being an examination of who they are, how they think, and what they do.

See also the excellent Homeless in Sacramento: Welcome to the new tent cities.

“We also have to acknowledge that these cities that come top of the polls also don’t have any poor people.” (via) 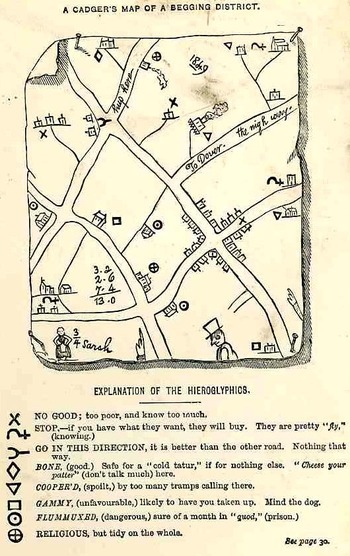 A Cadger’s Map of a Begging District. Frontispiece to The Slang Dictionary; or, the Vulgar Words, Street Phrases and Fast Expression of High and Low Society. (via)

George Packer argues that “in vast, impoverished cities like Bombay, Cairo, Jakarta, Rio, or Lagos, the plot lines of the nineteenth century proliferate.” And thus, the readers of the developing world can more easily relate.

The concerns of that literature [late 19th-century novels]—the individual caught in an encompassing social web, the sensitive young mind trapped inside an indifferent world, the beguiling journey from countryside to metropolis, the dismal inventiveness with which people survive, the permanent gap between imagination and opportunity, the big families whose problems are lived out in the street, the tragic pregnancies, the ubiquity of corruption, the earnest efforts at self-education, the preciousness of books, the squalid factories and debtor’s prisons, the valuable garbage, the complex rules of patronage and extortion, the sudden turns of fortune, the sidewalk con men and legless beggars, the slum as theater of the grotesque: long after these things dropped out of Western literature, they became the stuff of ordinary life elsewhere, in places where modernity is arriving but hasn’t begun to solve the problems of people thrown together in the urban cauldron.

Own goal: How homeless soccer explains the world – By Wells Tower (Harper’s Magazine)

“Food has become an elite preoccupation in the West, ironically, just as the most effective ways to address hunger in poor countries have fallen out of fashion.”