Behind the seductive lure of “New Year, New You” lies another kind of mistake, too: the idea that what we require, in order finally to change, is one last push of willpower. (Presumably, the hope is that the “January feeling” of fresh starts and clean slates will provide it.) The assumption is that you’re a bit like a heavy rock, poised on a hill above the Valley of Achievement, Productivity and Clean Eating. All you need is a concerted push to get you rolling.

New year, new you? Forget it

The trend for digital detox holidays and other fashionable manifestations of spare, minimalist, decluttered living: what if they’re at least partly motivated by avoidance?

Why cabin fantasies shut out reality

When you take a class with the Harvard University art historian Jennifer Roberts, your first task is always to choose a work of art, then go and look at it, wherever it’s displayed, for three full hours.

Why patience really is a virtue

There’s only one viable time management approach left (and even that’s only really an option for the better-off). Step one: identify what seem to be, right now, the most meaningful ways to spend your life. Step two: schedule time for those things. There is no step three.

This column will change your life: stop being busy

“Comedians are known for having long marriages,” he says. Why? “I have to apologise for the self-serving answer I’m going to give you, but: we’re smart. If you’re smart, you stay married if you can. Marriage is hard for everyone – that’s a basic fact – but it’s a better life if you can do it. Very nice. Very relaxing. Very enjoyable.”

To this day, Seinfeld still marks crosses on a calendar, keeping regular hours (albeit relaxed ones: most days, he says, he’ll meet a friend for a two-hour breakfast) and spending 20 minutes a day doing Transcendental Meditation, which is the only topic to jolt him from his default nonchalance into real enthusiasm: “I could do the whole interview about TM, to be honest, but we’d just lose everybody. I’ll describe it very simply: it’s like you have a phone, and somebody gives you a charger for it. And so now you can recover from this exhausting experience of being a human, twice a day. It’s deep rest. Now that’s something that can help people. As opposed to this idiotic calendar thing.”

Jerry Seinfeld on how to be funny without sex and swearing 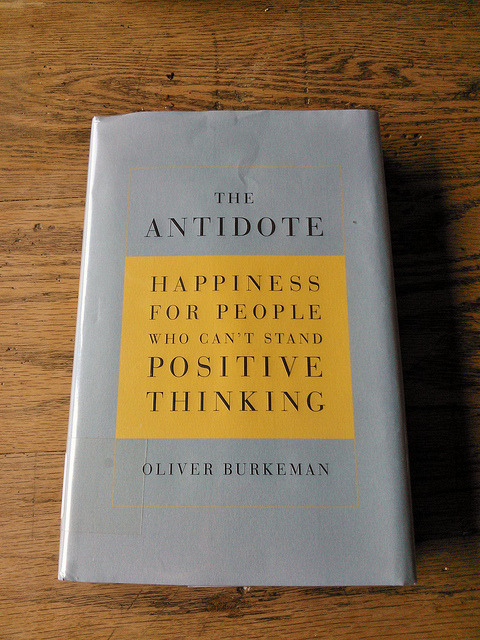 As the Buddha said two and a half thousand years ago, we’re all out of our fucking minds! That’s just the way we are. – Albert Ellis

What a fine book. If, like me, you have ongoing interest in stoicism, happiness, mindfulness meditation, thinking about death and failure, and tend to be a skeptical of your Rhonda Byrne/Tony Robbins types (but are at the same time, kind of amused by them), you’ll probably like Oliver Burkeman’s The Antidote: Happiness for People Who Can’t Stand Positive Thinking. In every chapter, there’s some kind of personal connection–an interview, an experiment, field research–but it doesn’t turn preachy or antagonistic. He’s not much for dishy takedowns or “turns out” revelations. He examines a few traditions or lines of thinking, and connects them with an experience. I think he strikes a good balance between his first-person narrative and his research and exploration.

Early on, Burkeman suggests that one weakness in happy thinking is what you might call a reductionist problem: life is messier than that. Most things aren’t binary. Life is full of uncertainty, there are constant threats to our precarious hold on whatever we’ve got going for us, and, to top it all off, there’s a shitty,  guaranteed end result:

No matter how much success you may experience in life, your eventual story will be one of failure. Your bodily organs will fail, and you will die.

You have to make peace with that. And blinding, sunny optimism doesn’t always afford the opportunity.

Burkeman finds a practical objection to positive thinking that I hadn’t considered: Kind of like the challenge “do not think of a pink elephant”, when you try to live the admonition to “think positive”, you end up with this constant meta-cognitive scanning. Am I thinking happy? Is this a negative thought? Am I successfully not thinking about bad things X, Y, and Z? You naturally think of negative things while policing yourself for negative thoughts. How can you change this? One alternative is a more stoic approach. Avoid or minimize the labeling in the first place, or confront it honestly and let it go. After all,

Nothing outside your own mind can properly be described as negative or positive at all.

It’s a more global perspective. Outside events run through a filter (our beliefs) and then generate some interior reaction. If you really embrace this, you get more power over how you (choose to) feel.

And how bad can it be, really? That’s another more stoic/realist tactic: face the disaster head-on. Imagine, in detail, how bad it could be. One advantage of this worst-case scenario approach: it “turns infinite fears into finite ones”. I love that.

Another practical barrier to positive thinking I thought was interesting was about affirmations: we simply don’t internalize them very well. And when things like “I’m good enough, I’m smart enough…” just don’t ring true with how we already conceive of ourselves, thinking them is only going to make us more anxious. Even positive visualization can make you relax instead of pumping you up. And I love this line about advice and motivation:

Motivational advice risks making things worse by surreptitiously strengthening your belief that you need to feel motivated before you can act. By encouraging an attachment to a particular emotional state, it actually inserts an additional hurdle between you and your goal.

So, the stoic approach is valuable: it’s gonna suck, you don’t feel like it, and you won’t anytime soon, it might be a disaster, but do it anyway. Whatever “it” is.

In the chapter on Buddhism, non-attachment, and meditation, he brings up Albert Ellis‘ idea of “musturbation”. We become obsessed with things we want. We become absolutist about the results we need. There’s a related idea here: “goalodicy” (coined by Christopher Kayes), where we hang on to and internally defend faulty goals as a way of preserving our identity, because we’ve already invested so much of ourselves in a particular happy outcome. Build things up too much, and you get burned. So meditation is both practice in giving up control, and a way to honestly confront what life brings you. Burkeman quotes a great, great line from Barry Magid:

Meditation is a way to stop running away from things.

A related idea: considering any problems you face, how many of those problems are problems right now? As in, now now. Probably none or few–most problems we have (and our compulsively recycled thoughts about them) are about the past or about the future. Meditation brings you back to this moment, when you can actually do something.

Another way to think about the problem of optimism is that it can turn into a way of chasing security, and fleeing vulnerability. The problem, as Alan Watts says, is that

If I want to be secure, that is, protected from the flux of life, I am wanting to be separate from life.

I loved the final sections about death, too. Burkeman talks about memento mori, and mono no aware, and more broadly the idea of failure and “letting death seep back into life”. Carol Dweck comes up in a short discussion of talent and success, specifically her idea that the mindset we have about success tends to be either “fixed” or “incremental”. That is, we see success in terms of innate talent/ability vs. growth/learning, and thus tend to see failure in terms of dread/threat/identity crisis vs. improvement/opportunity/adaptation. (Let’s make better mistakes tomorrow!) So in the midst of a failure-shy, success-worshipping culture, we get a better sense of community and empathy when we acknowledge mess-ups as an expected, normal, more-than-likely-than-not occurrence. And more practically:

Failure is a relief. At last you can say what you think.

his book would pair well with Marcus Aurelius’ Meditations or Alain de Botton’s Religion for Atheists–I detect similar attitudes in each. For good books on happiness, I recommend Jonathan Haidt’s The Happiness Hypothesis, and Mark Kingwell’s In Pursuit of Happiness.

Motivational advice risks making things worse, by surreptitiously strengthening your belief that you need to feel motivated before you can act. By encouraging an attachment to a particular emotional state, it actually inserts an additional hurdle between you and your goal.

Oliver Burkeman in The Antidote, the first 1/3 of which I can confirm is good. After the intro, he talks about Stoicism and the dangers of optimism; this came from a chapter on Buddhism, non-attachment, and mindfulness meditation.
2011-01-15 ~ Mark

I’ve come back to read this several times over the past couple weeks. (via)

I’ve come back to read this several times over the past couple weeks. (via)