The Neon Demon. This is Nicolas Winding Refn‘s best movie, haters. I think it was More Than One Lesson, their episode on this movie, where Tyler Smith talked about this being a perfect pairing: Refn loves image and surface and sheen, and here he finds characters to match. Mirrors everywhere, all-consumptive. Don’t forget it’s a horror movie.

The Neon Demon. If divisiveness was Refn’s goal, it seems he delivered. Lots of hate and eye-rolling for this one, and I get it to a degree (especially when the director is kind of a troll). But I liked it. I appreciated Lauren Wilford’s perspective. Movies are not just the stories they’re about, but also the way they are about it. Gotta make space in the world for demented fever-dreamy impressionist movies, too. 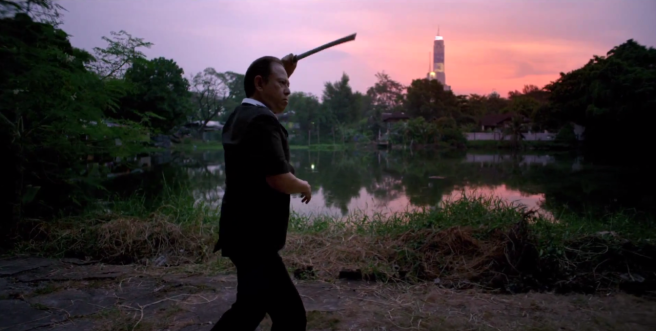 Only God Forgives. Rewatch. I thought maybe I was missing something the first time around, but I have trouble meeting it where it is. I wish there more tension to hang these beautiful moments on.

Drive. Third viewing. That elevator scene is still top notch. I’m a sucker for any movie that suspends time to drift into a moment just because. Oscar Isaac has some of the best casual menace in the game right now. Filed under: Drive.

Only God Forgives. Almost fell asleep. Veeerrry nice to look at, here and there, but it’s kinda boring. Even setting aside plot and taking everything as symbol or allegory or myth or archetype, the tension didn’t hold for me. None of the energy or electricity you see in Drive. Not quite as starkly focused as Valhalla Rising. No knockout performance like in Bronson. All that said, I did dig the ongoing hands/power/potency theme, and the use of an international setting without a ton of dumb exoticizing.

Bronson. It’s an oddball comedy-horror character portrait, goofier and more stylized than I expected, e.g. the frequent juxtaposed opera in the soundtrack. My respect for Tom Hardy keeps growing. Refn really has a thing for these violent loner types. Hunger is a very, very different look at a UK prison experience that’s worth seeing. 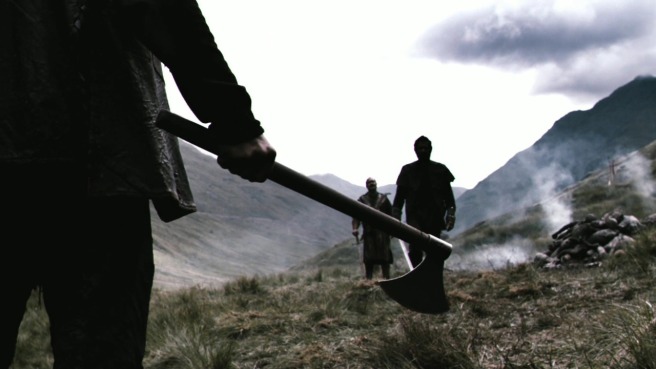 Valhalla Rising. I wonder if, seen in a different state of mind, I would call this brooding rather than plodding. So much slow motion and silence, which is punctuated by some astounding brutality. There are hints at good things, but just didn’t do it for me. I’m trying to catch up on the Refn filmography before Only God Forgives, and I definitely have to recommend Drive over this one.

The movie is so emotionally/sexually repressed (all cool, slick surfaces, glazed reflections and valentine-candy-heart cliches) that this over-the-top, graphic-but-artificial RED – it’s not just red, it’s blood – feels like an absurd, joyous, orgasmic release.

So much film geekery is informed, more or less directly, by the Manny Farber discourse on such action-oriented fare that its cred as ‘termite art’ comes already embossed on its metallic exterior by virtue of its generic/critical positioning even before consideration of the specifics of the individual case. […]

Drive is, then, a contribution to its particular kind of silent-tough-guy, hyperstylized, cool crime film. But what it adds is filigree. It’s a baroque, decadent, intensification of and comment on those aspects of Melville, Hill and Mann that Refn fetishizes, film geek that he is, and it appeals to other film geeks, like me, who share his tastes. 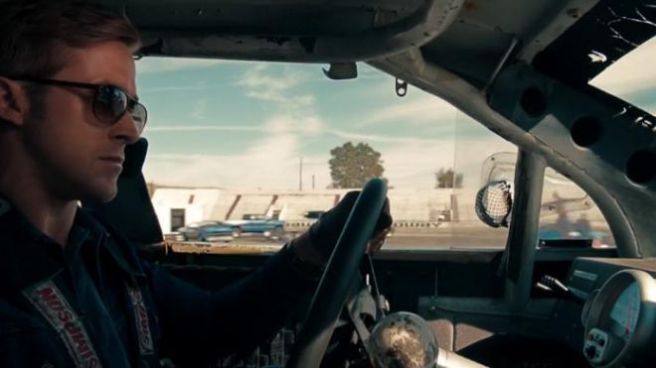 Drive. Second viewing. (The first.) I told myself I was just going to watch the opening scenes again, but I kept going. This time around I find myself enjoying the directing and mechanics even more and the plot/characters so much less. I can’t handle the beach scene. Still, those first 20-40 minutes? That’s some good stuff.

Drive. I liked it about as much as I liked the book, which is to say it’s a damn fine way to pass a couple hours. Excellent opening scene, then putters just slightly. Much slower, quieter than I expected but the supporting cast keeps it alive. It’s like a lot of film noir in that way – much of the movie’s momentum is from the hero cornered, reacting to other people’s plans. Interpretive tip: it’s not about driving cars. Good soundtrack. The movie wouldn’t be the same (wouldn’t be possible?) without it. Gosling’s role makes me think of Eastwood’s roles as the Man With No Name and William Munny, and Delon’s in Le Samouraï and a little bit of Clooney’s in The American.