Give your past, present and future selves influence in proportion to what each has earned. Which one of you is working with the most reliable information — about you and nobody else?

Live by the schedule as a gift to yourself. Deferring to it will take many high-stakes, high-guilt decisions out of your day on a daily basis.

Students tend to place too much importance on the specifics of a job, as if there was a specific knowledge work pursuit hardwired in their genes.

Study Hacks » The Need for a Deeper Vocabulary of Career Aspiration

Life is, to some extent, an extended dialogue w/ your future self about how exactly you are going to let yourself down over the coming years

Listen to your friends, by all means, but not to the conclusions they’ve drawn; those are about them. […] Listen instead to the reasons your friends felt and concluded what they did, and use them to inform your decisions.

Books. Books. Books. People have been doing [whatever it is your deciding about] for a while now. They’ve been moving West, leaving school, investing their savings, getting dumped or filing for divorce, starting businesses, quitting their jobs, fighting, dying and fucking for thousands of years. This is all written down, often in the first person. Read it. Stop pretending you’re breaking new ground.

How Do You Make Life-Changing Decisions? | RyanHoliday.net

The most adult decisions in your life are ones that put severe limits on other possibilities.

For a single person, thinking something through marks the end of the reasoning process; it becomes habit. But that gets the married (or life-partnered) person only halfway through at best.

Carolyn Hax. I used to read Hax all the time in the newspaper. Many thanks to Justin for reminding me that she’s still at it.
2011-08-29 ~ Mark

If my mind could gain a firm footing, I would not make essays, I would make decisions; but it is always in apprenticeship and on trial. 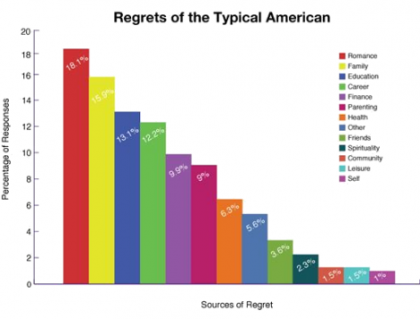 Regrets of the Typical American. And I like this bit from the abstract of the study: “inaction regrets lasted longer than action regrets”.

This is the Question, Charles Darwin writes at the top of the page. Each half of the page is a list brainstorming his two options with Emma Wedgewood:

Children — (if it Please God) — Constant companion, (& friend in old age) who will feel interested in one, — object to be beloved & played with. — —better than a dog anyhow. — Home, & someone to take care of house — Charms of music & female chit-chat. — These things good for one’s health. — Forced to visit & receive relations but terrible loss of time. —

My God, it is intolerable to think of spending ones whole life, like a neuter bee, working, working, & nothing after all. — No, no won’t do. — Imagine living all one’s day solitarily in smoky dirty London House. — Only picture to yourself a nice soft wife on a sofa with good fire, & books & music perhaps — Compare this vision with the dingy reality of Grt. Marlbro’ St.

Freedom to go where one liked — choice of Society & little of it. — Conversation of clever men at clubs — Not forced to visit relatives, & to bend in every trifle. — to have the expense & anxiety of children — perhaps quarelling — Loss of time. — cannot read in the Evenings — fatness & idleness — Anxiety & responsibility — less money for books &c — if many children forced to gain one’s bread. — (But then it is very bad for ones health to work too much)

Perhaps my wife wont like London; then the sentence is banishment & degradation into indolent, idle fool —

He also goes on to wrestle with the question of marrying sooner vs. later. (via)

See also: lay it all out where you can look at it.

Me, tweetin’ earlier this evening:

And I went on to remind myself: “Gotta be constantly tweaking the recipe, right? I kinda know the ingredients but the ratios get out of whack”. I say all this because it reminded me of something that I bookmarked a couple months ago and forgot to share, which is Seth Roberts on Optimal Daily Experience (via Justin Wehr):

Everyone knows about RDAs (Recommended Daily Allowances) of various nutrients. In a speech to new University of Washington students, David Salesin, a computer scientist, advised them to “maintain balance” by getting certain experiences daily:

This served him well in college, he said, and he continued it after college.

Roberts goes on to propose his own list. This isn’t rocket surgery. Make some basic priorities, try to check them off on a regular basis, re-evaluate every so often. So I think to myself, how simple would it be to take a basic calendar, divide each day into four quadrants for these four, and add a little check marks as appropriate so you can track yourself? Very simple. Done.

It also kinda ties in with Austin Kleon’s tumble about Ben Franklin and pros and cons lists. Says Ben:

And tho’ the Weight of Reasons cannot be taken with the Precision of Algebraic Quantities, yet when each is thus considered separately and comparatively, and the whole lies before me, I think I can judge better, and am less likely to take a rash Step; and in fact I have found great Advantage from this kind of Equation, in what may be called Moral or Prudential Algebra.

First off, I love the phrase “Moral or Prudential Algebra”. It ties in with my general attitude of 19th-century optimism (which phrase I stole for my Twitter bio), the idea that with a little forethought and pluck and some striving, you can make Good Life Decisions. And secondly, there’s that idea that you should lay it all out where you can look at it–and this is not just for quote creative unquote stuff. The point is, your life is the Ultimate Creative Project, if you will, so you’d best keep an eye on the how the stuff’s accumulating. Not the details themselves, but the pattern, the trend. To quote Colin Marshall again:

Satisfaction is a product not of where you are, but of where you’re going. To get calculistic, it ain’t about your value, it’s about your first derivative (and maybe your second). In this light, statements like “When x happens, I’ll attain happiness” don’t make sense, but ones like “While x is happening, I’ll be happy” make somewhat more.

And a bit later in the evening I was reading Derek Sivers’ excellent notes on The Happiness Hypothesis (in the bookpile now) and I came across a couple quotes that tie in with Roberts, Salesin, and Franklin. First on moral education:

Moral education must also impart tacit knowledge – skills of social perception and social emotion so finely tuned that one automatically feels the right thing in each situation, knows the right thing to do, and then wants to do it. Morality, for the ancients, was a kind of practical wisdom.

and then on choices vs. conditions:

Voluntary activities, on the other hand, are the things that you choose to do, such as meditation, exercise, learning a new skill, or taking a vacation. Because such activities must be chosen, and because most of them take effort and attention, they can’t just disappear from your awareness the way conditions can. Voluntary activities, therefore, offer much greater promise for increasing happiness while avoiding adaptation effects.

Note to self: moral education (not just ethics stuff, but we’re venturing into Franklin’s thirteen virtues here) involves a set of skills that you can practice. Practice and it becomes voluntary, habitual, sustaining. That’s my working theory, in any case. So what have I learned today? Pay attention. Make good choices. Nail the basics, consistently. Basically, the most vague, mundane things ever, but sometimes having a new sense of the gestalt of the whole endeavor can be very refreshing.

“The heuristics on this list are easily memorable and implementable life problem-solving strategies — "quick and dirty” ones, if you like — that I’ve drawn from experience which, even if they prove shaky in border cases, still work most of the time.“

The War on Mediocrity – Heuristic roundup ’09

“The Birth Clock is a fragile glass object containing a digital clock that is not working; it is designed to help you to come to a decision when you’re stuck at a specific point in life. Smash the glass, and the clock will start to work, leaving you with the broken object as a reminder of your dramatic decision. Leave the object as it is, and you remain out of time, having the beautiful object as a reminder of your resistance to change.”
Cool idea. I can feel the anticipation just thinking about having one. Not sure what I’d use it for, though.