I really liked Ethan Warren‘s reflections on Punch-Drunk Love. (Bright Wall/Dark Room is one of the best publications going.) 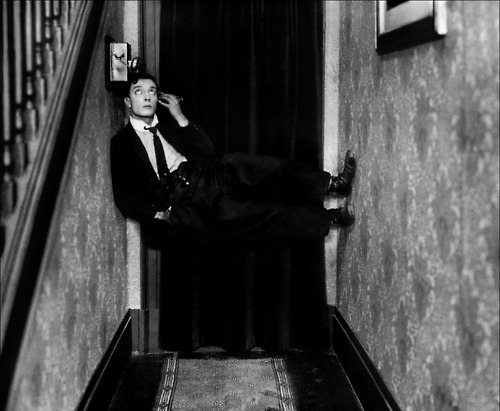 “It’s said that Chaplin wanted you to like him, but Keaton didn’t care. I think he cared, but was too proud to ask. His films avoid the pathos and sentiment of the Chaplin pictures, and usually feature a jaunty young man who sees an objective and goes for it in the face of the most daunting obstacles. Buster survives tornados, waterfalls, avalanches of boulders, and falls from great heights, and never pauses to take a bow: He has his eye on his goal. And his movies, seen as a group, are like a sustained act of optimism in the face of adversity; surprising, how without asking, he earns our admiration and tenderness.”

The scaffolding around this essay is my unshakeable belief that images matter, in real time and in retrospect, because visual media can and do shape the way we see the world, frequently more than we bargained for. Does Hersh’s account transform “Zero Dark Thirty” from half fact into whole fiction? If the cinematic treatment of a supposedly true story turns out to be a lie, does that make it propaganda? To what, exactly, can we ascribe the profusion of doubt that’s accompanied this tale of sound and fury, and what does it mean that this is a story we can’t seem to tell, much less find the moral in?

I really liked this essay (and the movie).

NOT THAT THERE’S ANYTHING WRONG WITH THAT.

I love that [Elaine] eats on screen—a lot—and it’s so normal that she doesn’t even have to say a bunch of jokey punchlines about it. Liz Lemon is perhaps a good counterexample here—she’s also often portrayed eating, but whether it’s a donut or a pizza or a piece of cheese, the food is always the punchline to a joke. Because watching a cute woman eat a lot is just HILARIOUS to us, right? But Elaine, she just walks into Jerry’s kitchen and starts eating cereal—or ice cream, or muffins—while talking about the weather or about how she hates her roommate or about toupees. Not one word about the food. It’s almost as though she’s just eating because she’s hungry or even—gasp!—because she simply wants to. This is maybe the healthiest portrayal of a woman’s appetite I’ve ever seen on screen.

Man, I had the biggest crush on Elaine.

Okay, I’m not fooling anyone with the past tense there.