Most of my days involve four- and five-hour stretches of what I would characterize as dicking around on the Internet.

I do not disagree with any of these. Food for thought!

4 Reasons traveling is a waste of time | Penelope Trunk

He who bestows all of his time on his own needs, who plans out every day as if it were his last, neither longs for nor fears the morrow. For what new pleasure is there that any hour can now bring? They are all known, all have been enjoyed to the full.

Heaven knows! such lives as yours, though they should pass the limit of a thousand years, will shrink into the merest span; your vices will swallow up any amount of time.

Look back in memory and consider when you ever had a fixed plan, how few days have passed as you had intended, when you were ever at your own disposal, when your face ever wore its natural expression, when your mind was ever unperturbed, what work you have achieved in so long a life, how many have robbed you of life when you were not aware of what you were losing, how much was taken up in useless sorrow, in foolish joy, in greedy desire, in the allurements of society, how little of yourself was left to you; you will perceive that you are dying before your season!

I am angry and curious. These two things propel me forward. I come from the minimum-wage working world. I have no illusions as to where I should have ended up. I have really nothing to lose, and so I go.

I think a young poet, or an old poet, for that matter, should try to produce something that pleases himself personally, not only when he’s written it but a couple of weeks later. Then he should see if it pleases anyone else, by sending it to the kind of magazine he likes reading. But if it doesn’t, he shouldn’t be discouraged. I mean, in the seventeenth century every educated man could turn a verse and play the lute. Supposing no one played tennis because they wouldn’t make Wimbledon? First and foremost, writing poems should be a pleasure. So should reading them, by God.

You’re probably better off if you can tolerate, or even enjoy, your own mediocrity as long as it takes to get something made. What’s obvious to you could be amazing to others. And fortunately, whether it’s good or bad, joy’s soul lies in the doing.

Paris Review – The Art of Poetry No. 30, Philip Larkin 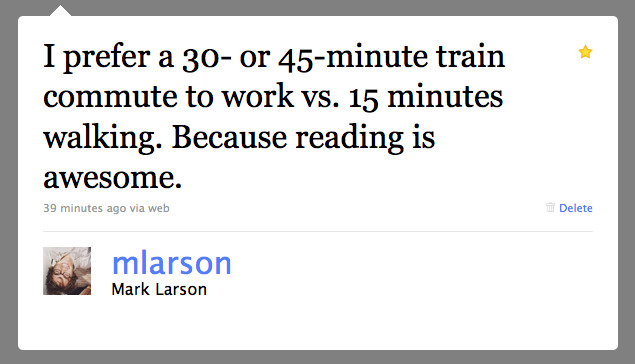 Constraint in everyday life. A lesson learned as I spent a couple weeks dog- and house-sitting barely a mile from the office. In theory my time not-on-a-train in the mornings and afternoons could have converted to reading time like usual. In theory. If I had any discipline. And thus I remind myself that less important than the amount time I have–a shit-ton, if you know where to look (as in, let us say, around lunchtime; before, during and right after breakfast when I’m usually just kind of sighing and limping around the house; and pretty much every day from 6pm to midnight)–is the structure I give it.

Because growth curves are asymptotic, I am convinced it is better to get pretty good at a lot of things rather than investing your scarce time in becoming marginally better at a couple of things.

Wehr in the World: Squibs. It may also be easier/more efficient to maintain a state of pretty-goodness than a state of mastery.
Link ~ 2010-04-23 ~ Mark

Spinning class, the scarcity heuristic, and me

Don’t say you don’t have enough time. You have exactly the same number of hours per day that were given to Helen Keller, Pasteur, Michaelangelo, Mother Teresa, Leonardo da Vinci, Thomas Jefferson, and Albert Einstein.

One of the things I wish more people (anyone) would blog about is not just the books, movies, blog posts, or magazine articles they liked, but rather what in their estimation were the best uses of their time. Was it a chapter of a book or a particular article from the New York Times? Beyond just the content they consumed, was it maybe a conversation with a friend?

Wehr in the World: The best uses of my time

Dan Pink’s TED Talk about motivation and the ineffectiveness of extrinsic rewards and incentives in the workplace. Intrinsic is where it’s at.

I love planning and organizing things so much that sometimes IÄôd rather not ever do the actual thing.

(This is actually a running theme in my life. See also: song database but no new recordings, exercise plan but no new muscles. The only time it works in my favor is when having a plan inherently leads to the plan being success, as with a budget.

From an interview with Jimmy Carter:

Q: You’ve written memoirs, a historical novel, a children’s book, poetry—all while running the Carter Center. How many cups of coffee do you drink a day?

A: Well, I get up early. (Laughs.) I’m a farmer, still. I get up around 5 o’clock in the morning when I’m home, so I have three hours of good time to think and write before the normal events start happening in Atlanta at the Carter Center.

The 14-Second Work Year. Parody may not be timeless, but it can be very satisfying.

“Email apnea is temporary absence or suspension of breathing, or shallow breathing, while doing email.” [via collision detection]

A long essay on why crunch mode doesn’t work. The gist is that productivity peaks within the first 4, 5, or 6 hours of the day, then starts dropping. Eventually it dissolves completely. In the long run, that continuous overtime isn’t helping you or your company.

I learned about Parkinson’s Law while twittering today: “work expands so as to fill the time available for its completion.” Here are some other eponymous laws.